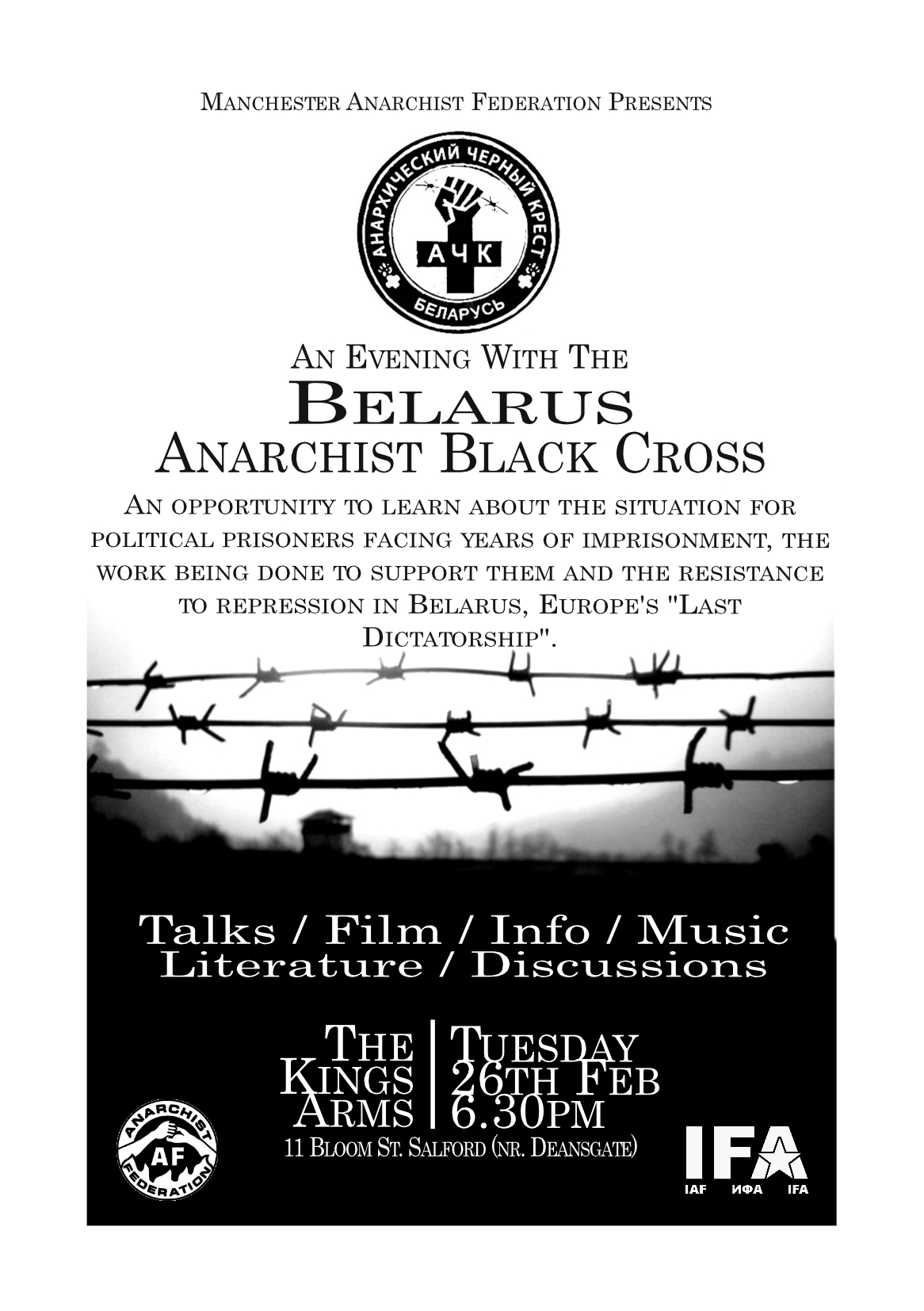 An opportunity to learn about the situation for anarchists facing years of imprisonment, the work being done to support them and the resistance to repression in Belarus, Europe’s “Last Dictatorship”.

Despite the welcome release of Pavel Syramolatau in September 2012, 5 comrades supported by the Anarchist Black Cross are still in Belarusian jails facing years of incarceration since being convicted of a range of crimes in 2011.

Artsiom Prakapenka was sent down for an attack on the KGB headquarters in Bobruisk, in solidarity with anarchists arrested in 2010. He faces 7 years.

Jauhen Vas’kovich faces the same, being convicted of the same crime.

Ihar Alinevich faces 8 years, convicted of attacking the Russian embassy in Minsk in solidarity with Russian anarchists arrested in the high-profile Khimki case. He was also convicted of arson at the Belarusbank and attack on the ‘Shangri La’ casino. He denies all of these charges but was kidnapped by plainclothed cops when in Moscow and extradited to Belarus illegally. He was also sentenced for participation in an anti-militarist demonstration near the headquarters of the General Staff in Minsk.

Aliaksandr Frantskievich was sentenced to 3 years for participation in an attack on the (state controlled) Trade Union Federation building and for computer hacking. Despite having serious health problems (has only one kidney) he is still being held in a pre-trial facility.

Mikalai Dziadok was also found guilty of the attacks on the ‘Shangri La’ and trade union building, and participation in the anti-militarist demo, and was sentenced to 4.5 years after being held illegally. He too denies charges against him.

The criminal damage for which these comrades were sentenced amounts to only a few hundred dollars in each case. They are being in especially harsh conditions, reflective of their noncompliance.

These convictions form part of an ideologically driven repression of anarchists in Belarus. They follow the revitalisation of Belarusian anarchism in the past few years. Unlike in some other ex-Soviet Union countries and other modern dictatorships, anarchists do not form a minor part of a dissident prison population consisting of the usual pro-democracy and anti-corruption activists. They in fact make up just under half of the ‘political’ prisoners in Belarus. This is partly because it is possible to have sentences revoked if you admit your guilt and write to the state asking forgiveness, which the 5 will not do.

The Belarusian ABC has campaigned consistently for them to be released and, in the immediate term, for them to be allowed visits, medication, letters and literature, and raises money for solicitors’ fees and to buy the comrades’ food. Supported by the International of Anarchist Federations (IFA-IAF) they are undertaking a tour of France, Italy, Germany, Spain and UK, to raise awareness and spark further solidarity. The latter have a good chance of success because Belarus’ President Alexander Lukashenko has expressed a desire for the country to be allowed to join the E.U. There are rumours that this may be considered if human rights in the country are addressed.

For more information about the prisoners and the ABC in Belarus:http://abc-belarus.org/